Now I know what you’re probably thinking. THE “F!” word. That four letter bomb that is used for emphasis or shock.

But, nope, if that is what you were guessing, it’s not that “F” word. Today, I’m talking about the other “F” word. The one that’s even worse than the aforementioned bomb. In fact, if I had to make a list of the top fifty bad words used within the English language as it relates to people, this would make it in the top ten – maybe even top five – of that list:

That word and all that goes with it, including the depressing feeling that you have tried everything, or, screwed up so bad there’s no coming back. We are taught that word at even the beginning of our education since right there in your report card, if you get an “F,” it means you had F-a-i-l-e-d. 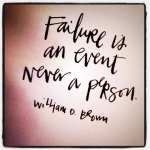 It’s unlike any other word in describing an individual. Outside of the obvious adjectives used in how someone looks, dresses, or presents themselves, all of those are superficial and can be seen on the outside. But failure, that is a hard one to see. To the passerby – even to a loved one – you can be confidant, jubilant, and present the life-is-good persona to the world but, if you have given yourself an “F,” there is that knowing screaming on repeat in your head that you are a failure at (fill in the blank).

Everyone, at one point, or, more (that being the most likely), have experienced it in some form. A failed class; job; a goal; a relationship. You may have even had some company on your way to failure: The naysayers…the ones whose support would mean everything but instead, are silent or, worse, chip away at your confidence one pebble at a time until you have nothing left and feel you can do nothing right.

What really counts though is what you tell yourself. No one can say you’re a failure. Only you. It’s what you feel inside and that name tag you and you alone pin across your soul.

“Failure is not an option” is a popular saying. But the truth is, failure doesn’t even exist – at least not in life. A computer fails, a networks fails, a government fails.  But for a living, breathing creature, four and two-legged, failure only happens when we stop trying. Whatever shoes you fill, they carry you down your path – not someone else’s – and boy there are many crossroads and side streets you take along the way. There is no failure, but a detour and another avenue to travel along to that goal you’ve made for yourself.

You might be wondering what inspired this blog. I saw someone this weekend that, through listening to his words, took me back to that place where I was with him so long ago, and for a split moment, well to be honest – a couple of hours spent deep in the pity-pot, I wanted to write that failure tag and place it across my soul. But, I didn’t. I wasn’t a failure then and I’m not a failure now. I am a winner because I believe in myself, for myself.

The beauty of being someone who can write and has a blog – I get the last word. However, my last word isn’t for him, it’s for all those who have suffered from that feeling of failure. You can’t fail, it doesn’t exist unless you stop trying, stop hoping and stop dreaming. Don’t do that. Follow your path, take that detour, take another one. Detours are what make the goal so worthwhile – and for writers, such great stories. 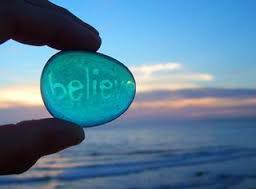 This entry was posted in Motivation and tagged Fail, Goals. Bookmark the permalink.

3 Responses to The Dreaded “F” Word